How can I get Vim to show documentation of a C/C++ function?

Most editors have a feature like when you press some keys by placing caret over a function, it pops the documentation of that function along with number and type of arguments that function takes.

I was wondering whether Vim offers such support. For example, while coding in C, I use a built in function qsort(). Since I am not sure about type and number of arguments it takes, I would like to know it without escaping Vim. Is it possible?

For C, pressing K on the keyword will pull up the built-in manpage directly. For instance, place the cursor on the printf keyword:

Now press K (upper case K) and the manpage for printf should appear in VIM:

This seems to work out of the box in all Debian-derived distros that I've tried it on, no specific configuration required.

If you can set up YouCompleteMe, it supports C, C++, JavaScript, Go and some other languages. Here's it in action:

It's a bit annoying to install, and once it's installed you need to configure it for C and C++ by creating a .ycm_extra_conf.py. I lifted one from this repo, and got this effect.

If you want proper documentation, the plugin in saginaw's comment seems to cover your C++ needs. I don't know of a generic one but you can probably find alternatives for other languages on vim.org.

you can use <C-w>} to open the definition of the keyword under your cursor in a preview window. YMMV, of course.

You can also use Vim's built-in "include-search" functionality: press [i to print the "signature" of the word under the cursor in the command-line: 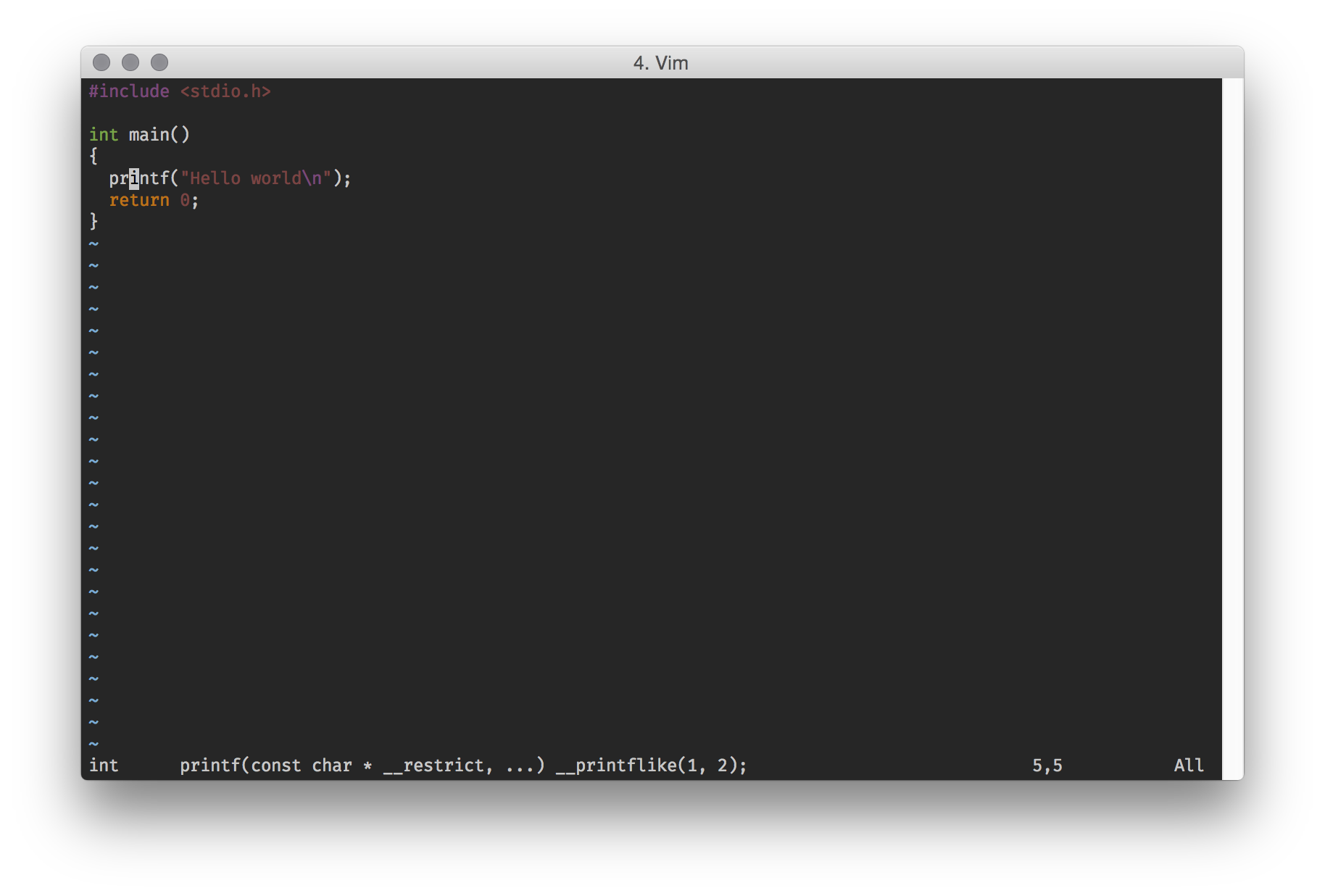 Using only vanilla Vim and complementary to tags-based solutions, K calls 'keywordprg' (defaults to man) on the word under the cursor (in normal mode) or the current selection (in visual mode) and displays the output. As recommended in another answer, this can be used to refer to the documentation for standard functions and variables (some IDEs might blur the line between documentation for standard and non-standard libraries, you will certainly not get the latter from K/man).

However, as missed by that answer, pressing K on printf will output the documentation of printf(1) ("the command printf"), not printf(3) ("the function printf" from the C Standard Library) which you are probably after. See What do the numbers in a man page mean? for more details about this distinction. Practically speaking, it is the output of man [-s] 1 printf (to which man printf defaults) instead of man [-s] 3 printf.

As stated in its documentation (:help kp), K takes a count:

Therefore, you can get the documentation for printf(3) from 3K.

As this is likely to be the desired behaviour every time K is used, I see 2 options:

and, as this behaviour is only useful in C code, add your choice among the solutions above to a ftplugin in your after-directory (e.g. to ~/.vim/after/ftplugin/c.vim). Also note that, according to @muru's comment, the packages containing the manpages might have to be installed beforehand.

Finally, as mentioned by @kyticka, for C++ (although also helpful in C), you may use a similar approach by replacing man with cppman as your 'kp' e.g. in ~/.vim/after/ftplugin/cpp.vim:

Alternatively, cppman can be used to cache entries from cplusplus.com as (offline) man pages and man can be set up to read those pages, allowing you to use the default to access documentation for the C++ Standard Library from man and, by extension, from the default 'kp'.

Vim's C/C++ file type comes with a decent omnicompletion function, which supports "preview" functionality. So add "preview" to your completeopt option and see a function signature when you do insert mode completion.

In normal mode, you could CTRL+W } to open the function declaration in the preview window manually.

As mentioned pressing K on the keyword works by searching a man page. For getting C++ man pages you may try https://github.com/aitjcize/cppman (it gets "man pages" from cplusplus.com and cppreference.com).

Install YouCompleteMe. When you place the cursor over an identifier, enter YcmCompleter GetDoc command to get the doc in a little preview window at the bottom. It works across many languages like python and c/c++.

Youcompleteme also displays the preview window during its autocomplete feature. You can customize the behavior of the doc preview with g:ycm_autoclose_preview_window_after_completion variable.

29
How to create my own autocomplete function?
4
How to disable the autocomplete menu but still get words completed?
0
How can I manually invoke the function signature preview?
11
How can Vim help me remember the trailing commas in BibTeX files?
4
How can I make an inoremap that calls a function
3
How to show completion menu when typing EX-command?
1
how to get dictionary and thesaurus completion