I have a function that detects the name of the subroutine* my cursor is in, thanks to this answer.

It is used in my statusline as follows :

It works well, excepted that I have to source my .vimrc file upon opening VIM every time I want it to work. I would like some sort of 'autocmd' that would save me this sourcing at each session I'm starting -- and also understanding what's happening !

(I naively tried autocmd BufWritePre,BufRead *.f* call SubName() but it does not seem to change anything).

user9433424 gave me an explanation as well as a solution through taking away the test around the set statusline command.

It works, but now when opening a non-fortran file I get a small empty zone in my statusline with color highlight %8... And it's a little ugly. I understand why but I'd love to get rid of it !

(Maybe I could just add a else case in my SubName function like :

but it was not really my initial plan !)

As asked by user9433424, here is the part of my .vimrc that concerns my statusline. 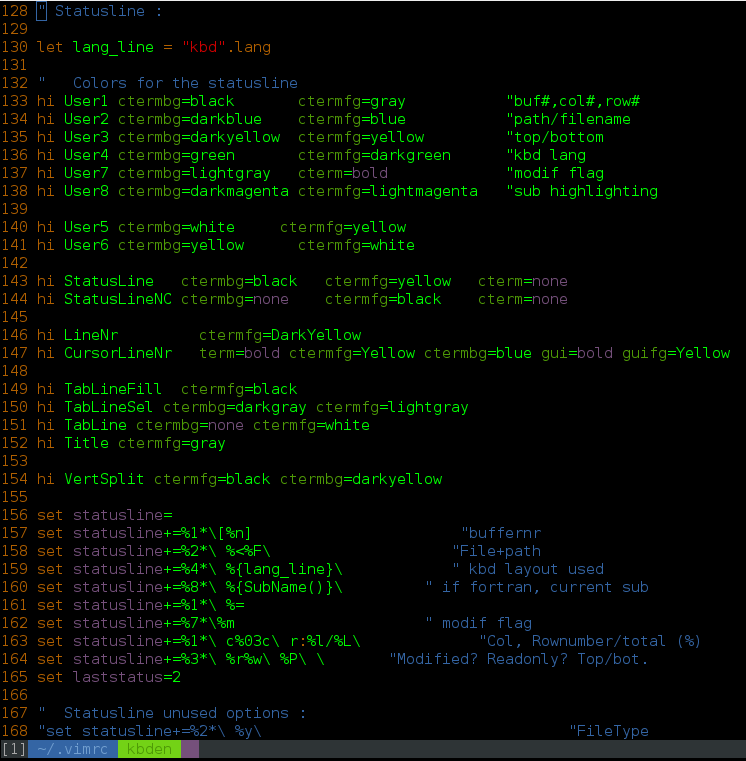 *"subroutine" is the name for Fortran's subprograms.

'syntax' is an option which is local to a buffer, I don't think you should test it inside your vimrc but inside your function SubName(), which you already did. So, you probably don't need the test around set statusline+=%8*\ %{SubName()}\.

Inside your vimrc, you could simply write this:

The reason why it didn't work is because during the startup, when Vim sources your vimrc, it's not in the context of a fortran buffer. The test fails and no %{SubName()} item is added to the statusline.

The test has to be performed in the context of the current buffer, inside the function.

The reason why, when opening a non-fortran file, you get a small empty zone in your statusline with color highlight %8 is because you didn't move the spaces around the item from your 'statusline' option to your function.

In your previous code, you had this line:

The backslash and space before and after the %{SubName()} item shouldn't be there, they should be inside your function where the syntax test is realised.

In the code I wrote earlier, there's this line:

Before and after the matchstr() function, there's ' ' . and . ' '. These are the original spaces which will be added around your subroutine name, but only if you're inside a fortran file.

Not the answer you're looking for? Browse other questions tagged vimscript vimrc statusline or ask your own question.