How can I really have some fun in Vim? [closed]

This question does not appear to be about Vi and Vim family of editors, within the scope defined in the help center.

I love Vim. I spend my whole life using it: At work I develop code with Vim, I edit config files with it, I write my emails with it. At home I write my todo lists and my buckets lists with it. On my free time I write a book in it. I go to meetups about Vim and I try to convince everyone I know to use it (Unfortunately my grandma doesn't agree that she should use it to write letters to her friends).

With all this love for our beloved editor I am facing a huge problem: as a normally constituted human I sometimes want to relax and have fun. Naturally I'd want to do that in our godly editor, but I don't know how I can do that. Of course I have spent hours customizing my color scheme and writing recursive macro that I watch for long time but after six or seven hours straight it is not that fun anymore.

So I'm calling to you fellow Vimmers: How can I have fun in Vim?

EDIT This post was obviously an April's fool (of course my grandma loves to use Vim). Thank you all for your answers and comments, some really cool ideas has been suggested!

There's a lot of way to have fun in Vim: for example, one could install the vim-script nibble plugin (this one has a dependency which also must be installed).

Once the plugin is installed the command :Nibble will start a snake game in a new buffer. The snake can be controlled with hjkl and the game can be paused with space. With that it is possible to spend hours of fun in our beloved editor. 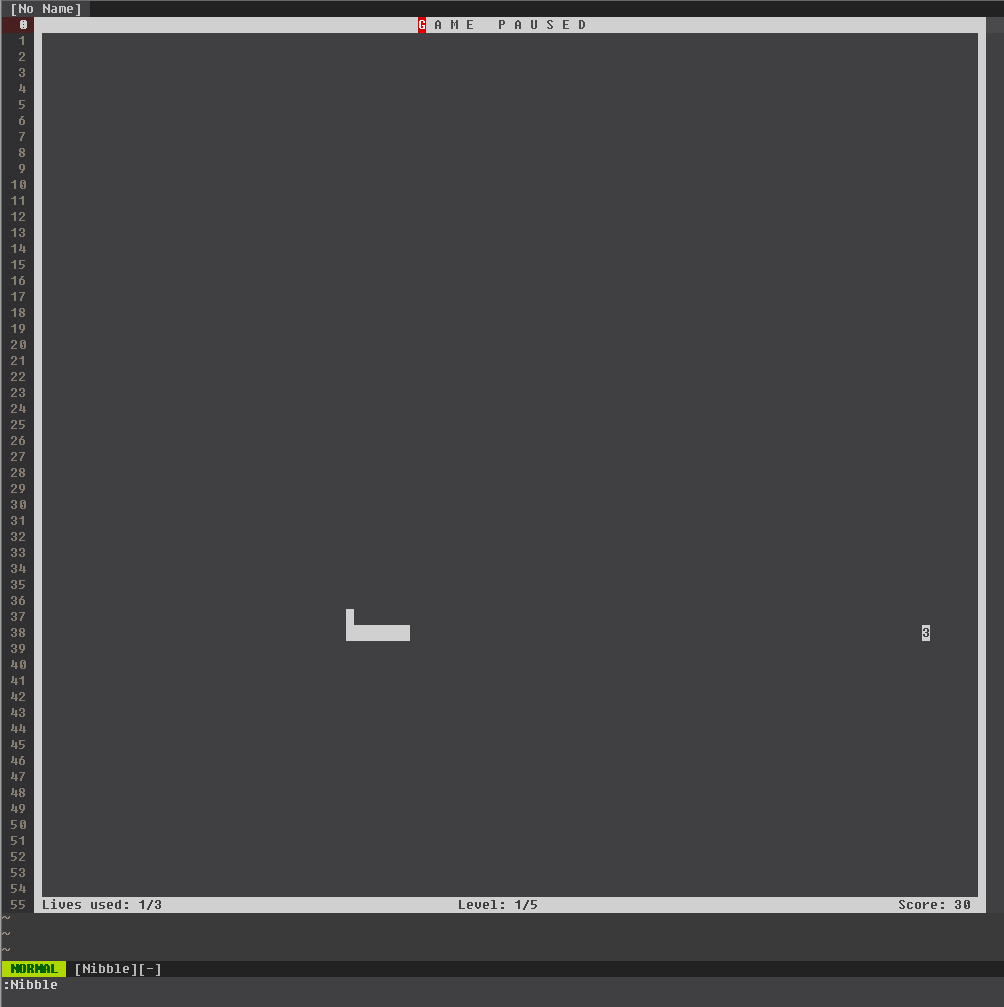 Now if you get bored with the snake you can still play a good old tetris game with TeTrIs.vim.

Please admire how beautiful it is: 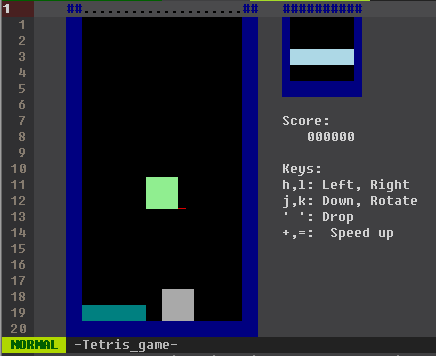 Finally, if you really are a hardcore gamer and still want some new experiences, you could try sokoban. This game asks for too much cerebral skill for me but I'm sure some geniuses will still enjoy it.

Edit As the question is now closed, I'll add the flappyvirb plugin suggested by @sp asic, which is actually much easier than the smartphone version:

And the Matrix plugin suggested by @mMontu which will provide you hours of entertainment in front of an amazing matrix screensaver: 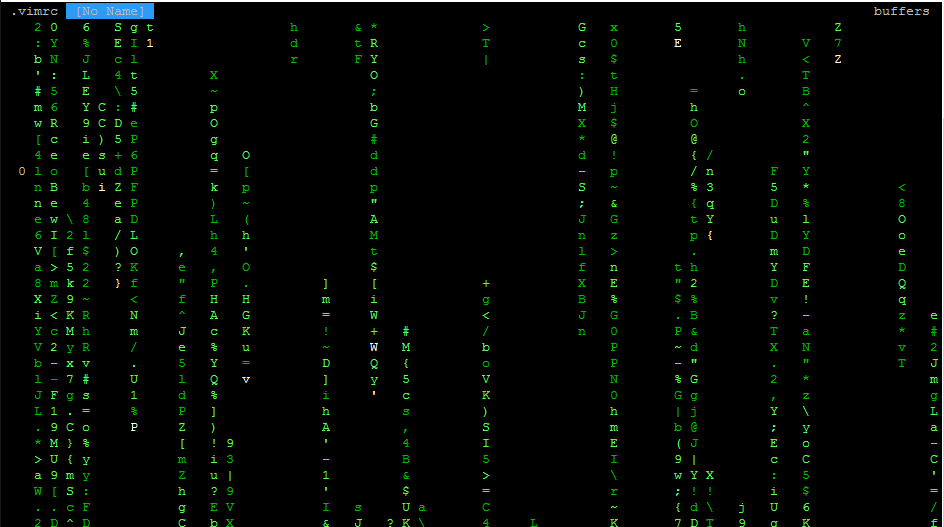 Edit 2 Because the fun never ends, here is another plugin for the retro gamers: rogue.vim as its name says it is a port of rogue in vim: 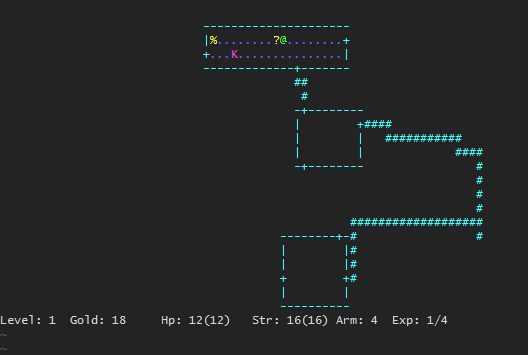 Explore a dungeon, fight monsters, win money: become a real Vim adventurer! The game seems to be really complete, the doc is huge and clear and a lot of commands are available. And like in every good rogue like, the dungeon is randomly generated on each new game.

Didn't notice VimGolf listed here, so thought I'd throw it out there:

It's a fun way to challenge yourself to do Vim things in fewer and fewer keystrokes. Apologies if you already knew of it.

Imagine a file format for another hobby you have, and write a Vim plugin for it, just for you.

For example, let's say you like to compose crosswords / puzzles. In this case, you could use/create a special file format, and complement it with a plugin that helps or automates certain operations, e.g. easy toggling of a black square, easy navigation from definition to word position in the puzzle, or automatic search in a specified dictionary for incomplete words, based on the current row/column cursor location. Stuff like that :)

Do you think you've mastered Vim? Do you know all the commands? Is using Vim getting boring and a banality? Are you longing for the days when discovering how to quit Vim was exciting and new?

Then level up your Vim to achieve the next level of Vim mastery! It's as simple as using :VimLevelUp!

This is guaranteed to give you a new way to experience Vim and endless hours of fun!

(Note: uses seq and shuf − it could be ported to BSD and OSX by using jot).

Yes, the Internet's best[citation needed] competitive sport has come to Vim. You can try the vim-only challenges, or prove Vim's superiority in the standard code-golf challenges. Playing code-golf is a fun way to pass the time for avid Vim fans.
Disclaimer: I am an active user of Programming Puzzles and Code Golf, and am therefore affiliated with it.

On a serious note, we do need more puzzles and solutions using / about Vim: at the moment there are only 6 questions about Vim, and 72 answers using the language (excluding on those questions). So if you like Vim, you might like Programming Puzzles and Code Golf.

Not the answer you're looking for? Browse other questions tagged vimscript or ask your own question.

5
Why vim plugins have a check on &cp
2
How to have vnoremap call function once?
1
How to replace all buffer content by some string?
0
How can I have lnext/lprev fallback to cnext/cprev when appropriate?
0
How to test if the current file is in some directory?
1
How to count the total number of windows excluding some buftype?
1
How to format code in vim by some external commands?