How does one put currently open files into tabs?

When I open a large number of files in vim with tabs only the first tabpagemax files are in tabs and any more than that are available by doing :n. After I close several of the open tabs how do I 'refresh' the tabs with the untabbed files?

You can use :tab ball to open remaining buffers from the buffer list in new tabs. However, if you have more buffers left, than your 'tabpagemax' option, the last tab will open split windows for the remaining ones.

or even :exe "tab ball" &tabpagemax

And now for something completely different...

It seems like you are using Vim's tabs as file proxies (aka 1 file == 1 tab). This is how most editors work. Vim on the other hand uses the same familiar name "tab" to be a view into window (splits) layout. This unfortunate naming has lead many a new vimmer to try and force tabs to behave as file proxies.

Vim's uses buffers. Buffers can be associated with files or simply scratch buffer not associated file. Each file has its own buffer. Buffers are Vim's file proxies.

Now windows/splits are views into a buffer. You can have many windows looking into the same or different buffers. You can move these windows around, create them, close them, or whatever you need to create a layout of buffers that meet your workflow.

Tabs are a collection of windows or a view into a layout of windows. It's just another layer above windows. You can of course use these tabs however you want, but trying to force Vim to use tabs like other editors is going to be pure folly.

But don't just take my word for it:

All these plugins do is show you your currently listed buffers. Maybe with some kind of positioning information so that you feel comfortable cycling via :bnext and :bprevious (or whatever mappings you might be using) through your buffer list.

Now that is great and all, these plugins have recreated other editor's version of tabs, but Vim already let you cycle through buffers without these plugins. The only thing missing was a menu which :ls will gladly do for you without wasting any screen real-estate.

Imagine having 10, 25, 50, or 100+ buffers open. How is your Buftabline going to handle that? My bet is not well. You need to stop reaching for simple tools like :bnext / :bprev and start reaching for a power tool like :b.

Behold the power of :b

The :b command can take a buffer number to switch directly to a buffer. Far more interesting, :b can take a partial filename.

Need more power in your :b?

Why ride a bike when you can fly? 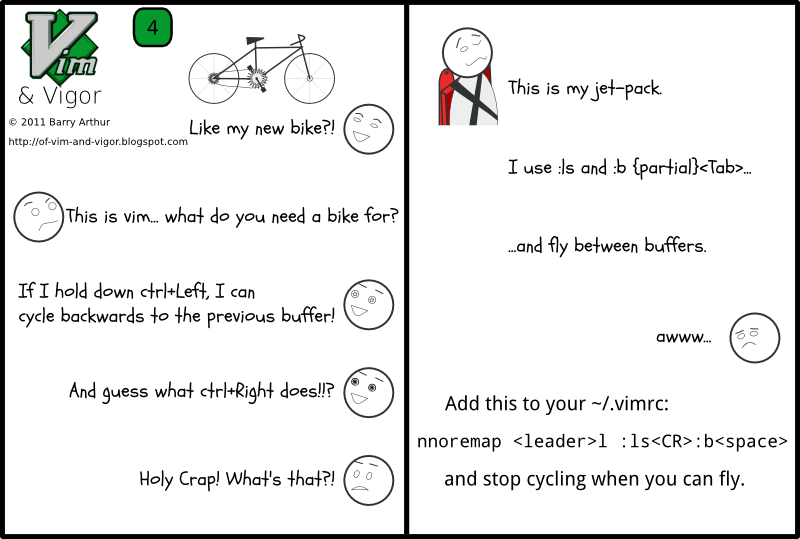 You can use a simple mapping to leverage both :ls and :b:

Now you can travel directly to you buffer you want. No more cycling.

Eventually you workflow will require you to use more than 3 buffers at a time. At that moment I would suggest you take another look at the :b command or at the very least get a nice fuzzy finder. It will save you time and effort.

So stop riding your bike when you can fly.

Not the answer you're looking for? Browse other questions tagged tabbed-user-interface or ask your own question.

10
How do I make opening new tabs the default?
2
Open multiple files in new tabs as read only
18
How do I reorder open tabs?
6
how to close tab and remove this file from buffers
5
How do I open a shell in only one tab in Vim?
5
Spread already open files into split view
1
Is it possible to increase the number of visible tabs in MacVim (without changing the window width)?
3
Open new file as tab on current vim instance through double-click
6
How can I make sure all buffers end up as tab or force remaining buffers into tabs?