I am writing a vimscript function which should keep in a consistent state a "home made buffer manager". The idea is that I want to keep a trace of my buffers in the tabs they were open in.

This "buffer manager" simply is a dictionary which has the numbers of the tabs as keys and lists of buffers numbers as values.

To add the different buffers to this dictionary I created the following autocommand:

And then I have my function:

When vim enters a buffer the function is called, an empty list is created if the tab wasn't already managed.

It is important to note that the first test seems to work: I don't want to add buffers which are not listed by :ls and when I open an help buffer for example, the buffer is not added

The function seems to work properly excepted for one use case:

When I open NERDTree with :NERDTree or :NERDTreeToggle the function doesn't seems to be executed (at least the debug echom that I used never appeared) and the buffer still end added to the manager.

Note that when I add

To the function the informations seems to be the good ones (the ones of the currently entered buffer).

I also checked that NERDTree buffer have their property buflisted to 0.

I have been working on this problem for several days now and I really can't figure out what's happening.

TL;DR Why NERDTree buffers are added to the dictionary when the function is meant to ignore nobuflisted buffers?

NOTE 2 Of course if someone needs any additional information I'll gladly add them to this question, ask in the comments.

I followed the comment of @VanLaser and splitted the if condition and based my test also on the name of the buffer. I also added some debugging message, here is the function in "debugging state":

I am sure that I don't have a call to the add function anywhere else than in this function.

I then followed this workflow: 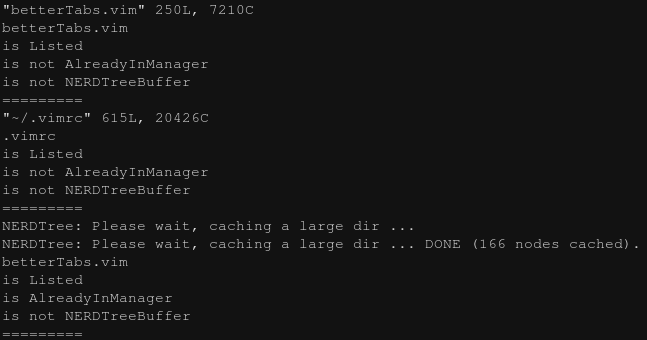 As you can see the opening of NerdTree doesn't seem to trigger the function (since I don't have any message about it in the log) BUT when I output the content of my dictionnary I get:

As I said I don't have any other call to add in my whole file (I gave sooner in the post the link to the github repo if anyone wants to check).

I don't understand how the buffer can be added when it doesn't even trigger the function.

More infos to follow the investigations of @VanLaser in the comments (many thanks to him):

Each buffer has a unique number. That number will not change, so you can always go to a specific buffer with :buffer N or N CTRL-^, where N is the buffer number.

So in theory if I get the number of the buffer I'm using it shouldn't change in the future.

Also I added the following lines at the very beginning of my function:

and with the same workflow I get the same results, also I checked that the buffer numbers was the good ones:

Here is the output of messages: 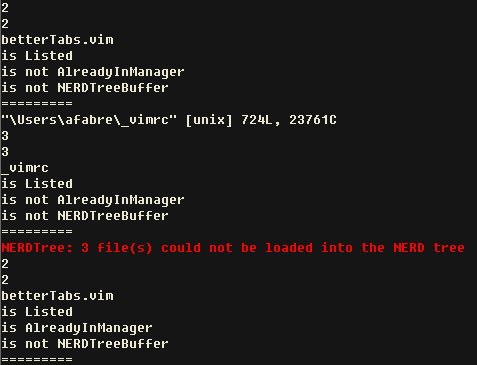 The output of ls!:

As you can see it seems that the numbers are correctly returned, but once again NERDTree is launched but doesn't trigger the function.

I changed the autocommand to

The function prototype to

I added after the assignation of newBufNr the following debugging echos:

For every buffers they show the same number (so using <abuf> in the autocommand doesn't make a difference in the cases I tried).

But it get even weirder because then every buffers appears as not listed: for a reason that I don't understand buflisted(expand('<abuf>')) returns 0 for every buffers.

PS I'm sorry for the length of this post I'm just trying to give as much informations as possible because I really absolutely don't understand what's happening there.

You cannot filter the buffer at its creation, you should wait until you have more informations.

I used the :debug NERDTree command to see all the calls that this function makes. When trying to stop it before the end I noticed something : A buffer was created, without name, without filetype. And it had the position/size of the nerdtree buffer (left split about 20 columns width).

It got me thinking that maybe you are trying to filter a buffer before it get's enough informations. So the buffer doesn't know that it will be a nerdtree buffer yet.

Instead of debugging manually I did a little log function that allows me to see the flow of events when calling :NERDTree :

You can see here that the buffer 1 is the original buffer and the 5 is the nerdtree one. And to create the nerdtree buffer, there are : two times the events BufEnter, BufDelete and BufWinEnter. It's kind of strange why nerdtree needs to open and delete two times the buffer to get working (but I'm sure they have a good reason).

This time I used the methods that you provide in your script and in your question to add details to the log :

The syntax is the following :

The isNERDTree is checked using the name, as you did in your question.

Here you can clearly see something : the new buffer (number 5) does not get noticed by the isNERDTree condition when triggering the BufEnter event, in fact it is not a nerdtree buffer yet. Later, on triggering the BufNew event its name change (but not its filetype).

Based on your primary conditions :

The add get called only one time : on the BuffEnter (notice the 1 & 1 & 1). When called on BufEnter, the buffer is added to the list, but after, because it already got considered, it doesn't change.

Once you know this you can do multiple things :

For the nerdtree plugin, you should double check the validity of the buffer. As you cannot filter the buffer on it's creation, you should wait for another event to remove the new buffer if needed.

Not the answer you're looking for? Browse other questions tagged vimscript plugin-nerdtree or ask your own question.

3
Reopen splits after closing them with <C-w>o

11
NERDTree How to open a file and automatically close the explorer buffer
3
How do I trigger an autocommand when user enters/leaves command mode
6
Fixing lag due to vim-troll-stopper plugin
1
Change the powerline name for nerdtree
3
What is a working setup to use Vim plugins UndoTree and Goyo together?
3
UltiSnips, Context and Tex
1
NERDTree-go does not leave cursor in the NERDTree
0
when viewing the nerdtree window, how can i widen it?
1
why doesn't col(“^”) work as expected