When I work on files in python, I sometimes mistake tabs for spaces and vice versa. Is there a way I can get Vim to display a character for a tab instead of a tab?

If you put these two lines in your .vimrc, tabs will be shown as > for the start position and - through the rest of the tab.

(Sidenote: listchars can also show trailing spaces with trail:x (replace x with the character you want to use for a trailing space), which can be useful as well.)

The basic answer is :set list, which causes tabs to display as ^I.

However, I recommend going beyond that. Just :set list is problematic in that it fails to preserve visual alignment on screen. For example:

doesn't look good, especially when you expect the g of g++ to appear under the first p of cpp (assuming tabstop=8).

Therefore, I suggest that in your .vimrc you put something like :set listchars=tab:␉· (To be clear, that's Unicode character U+2409 SYMBOL FOR HORIZONTAL TABULATION followed by U+00B7 MIDDLE DOT.)

As explained in :help listchars, a two-character setting for tab:xy causes visual alignment to be preserved:

The example above would appear on screen as:

Personally, I go all-out with my listchars:

These characters are distinctive enough that they rarely appear literally in document text.

To type these special characters into your vimrc, type Ctrl-vu23CE while in Insert Mode, as explained in :help utf-8-typing.

For occasional use, one can simply highlight all tabs in a document using the following search / command:

To remove the highlighting, simply type :noh which is short for :nohlsearch —no high lighting. 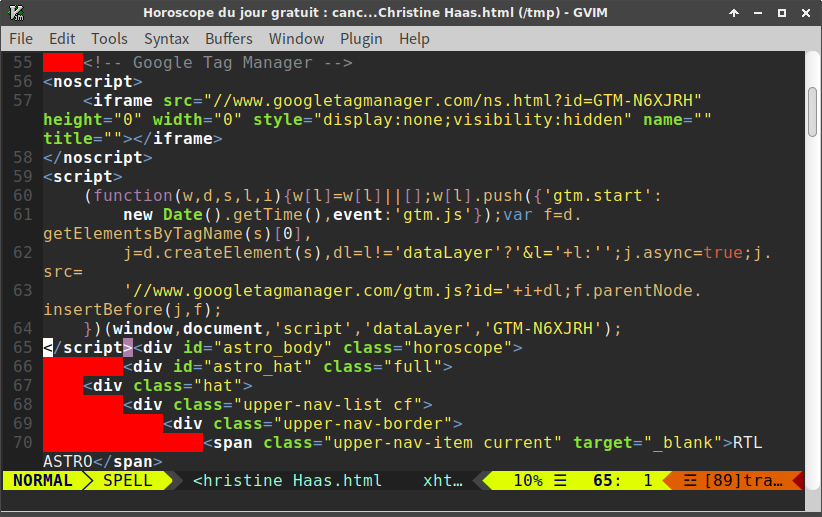 For more of these useful highlighting commands —including combined with trailing whitespace and making this permanent— see the Vim wiki.

I personally like the use of the plugin indentLine, which displays a vertical line at indentation levels.

It is of great help especially in python, where the indentation is important. 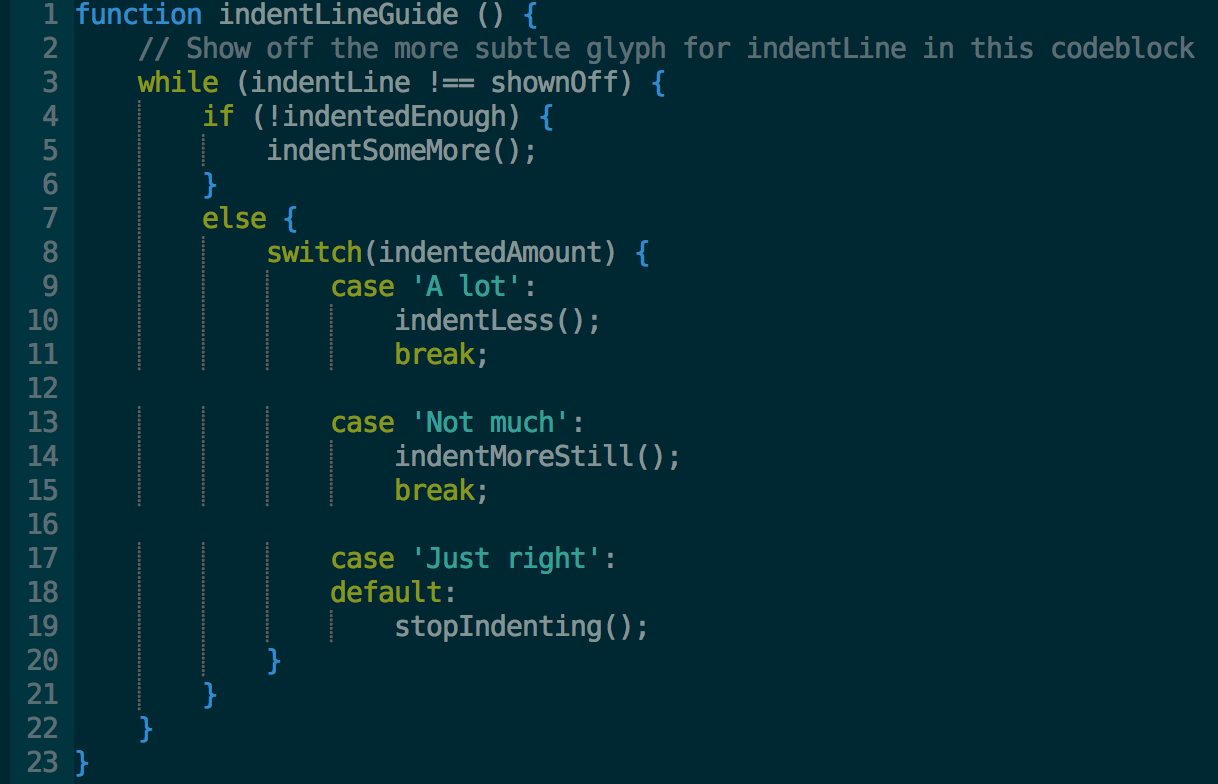 Among other things, it provides a toggle command, that can be mapped to a key combination, so that you can turn it off, when you don't need it.

Easiest method is to do :set list, which will show tabs as ^I and end of line as $.

This allows me to quickly check if there are tab vs space problems and then go back to a regular display.

You may want to show tabs differently in a regular terminal and gvim.

(Adding for completeness, in case others find it useful).

This can be easily achieved using listchars by specifying the tab as: ,tab:\ \ ┊,

By providing two escaped spaces in front of your tab declaration, vim will repeat the spaces. This is opposed to the default, where vim prefers the second character as the repeating character.

This achieves a similar effect to using a plugin like IndentLine without the overhead. Here's an example of what it might look like using the following complete listchars config:

I combined @john-om approach with this character Unicode Character 'ZERO WIDTH SPACE' (U+200B) and indentLine plugin. So, if I use spaces, plugin show nice formated indents, if I use tabs, pipes are the only visible mark and that is what I want. I can also toggle tab's marks.

Not the answer you're looking for? Browse other questions tagged whitespace tab-characters or ask your own question.

12
How to differentiate visually the white spaces in vim?
2
How to view tabs as conventional whitespace, not as control character ^I (caret I) in VIm?
0
Background color for listchars chars

18
Tabs for indentation, spaces for alignment
1
Make pipe behave like `col('.')`
9
Shift left or right (with `noet`) without converting existing spaces to tabs
2
Show leading whitespaces, but not including tabs
1
Have backspace delete whole tabs
2
On the length of tabs after an initial character
1
How to show 2 spaces as tabs in listchar?
2
Listchar for Preceding Indentation Space
0
Tabs and only tabs for any file type