JSX highlighting with Neovim and nvim-treesitter

I'm using Neovim 0.6.0 with nvim-treesitter installed and I mostly work with JavaScript, Flow, TypeScript based React projects. This means, I also need syntax highlighting for JSX and TSX.

Syntax highlighting works rather well with TypeScript and TSX out of the box, however, I'm finding that JSX isn't highlighting at all, and some statements are rather bland.

The navarasu/onedark.nvim theme is installed here.

I managed to get around this by installing the following packages: 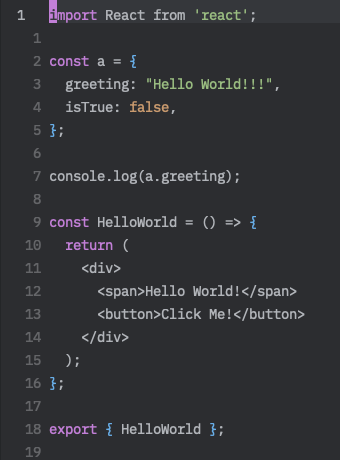 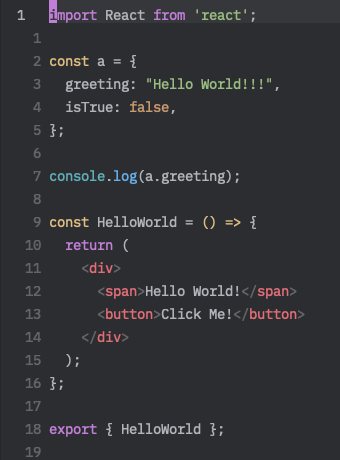 Note how the console.log on line 7 is looking rather untouched, and also, the JSX syntax is all in gray.

This probably isn't the right way to go. I don't think the above plugins use treesitter under the hood, and I think I might be having multiple syntax highlighers running at the same time, possibly even fighting over coloring the code.

Is there a better way to configure nvim-treesitter to work with JSX highlighting, and also get the default JS highlighting a bit richer?

Found the issue. This was because I didn't enable the highlight module where I called

So after fixing, the above call should at least look like this:

Not the answer you're looking for? Browse other questions tagged neovim syntax-highlighting or ask your own question.

5
Change default syntax highlighting scheme
20
How do I enable language-specific syntax inside a heredoc?
4
Change the filetype based on tags / regions in the file
3
How can I change Javascript syntax to higlight objects?
1
Enabling Syntax in Vim Creates Lag
1
Syntax highlight works for gvim but not for terminal vim
4
vim hangs when I open a typescript file
0
Typescript add missing import on cursor?