Is it possible to make Vim give me suggestions based on the libraries that I have on my system?

Let's say I create a folder called folder on my HOME directory. Let's also say that I enter this folder and create a node.js file called code.js. If I open this file with Visual Studio Code and I start typing a code that uses a library installed on the system, I see the following: 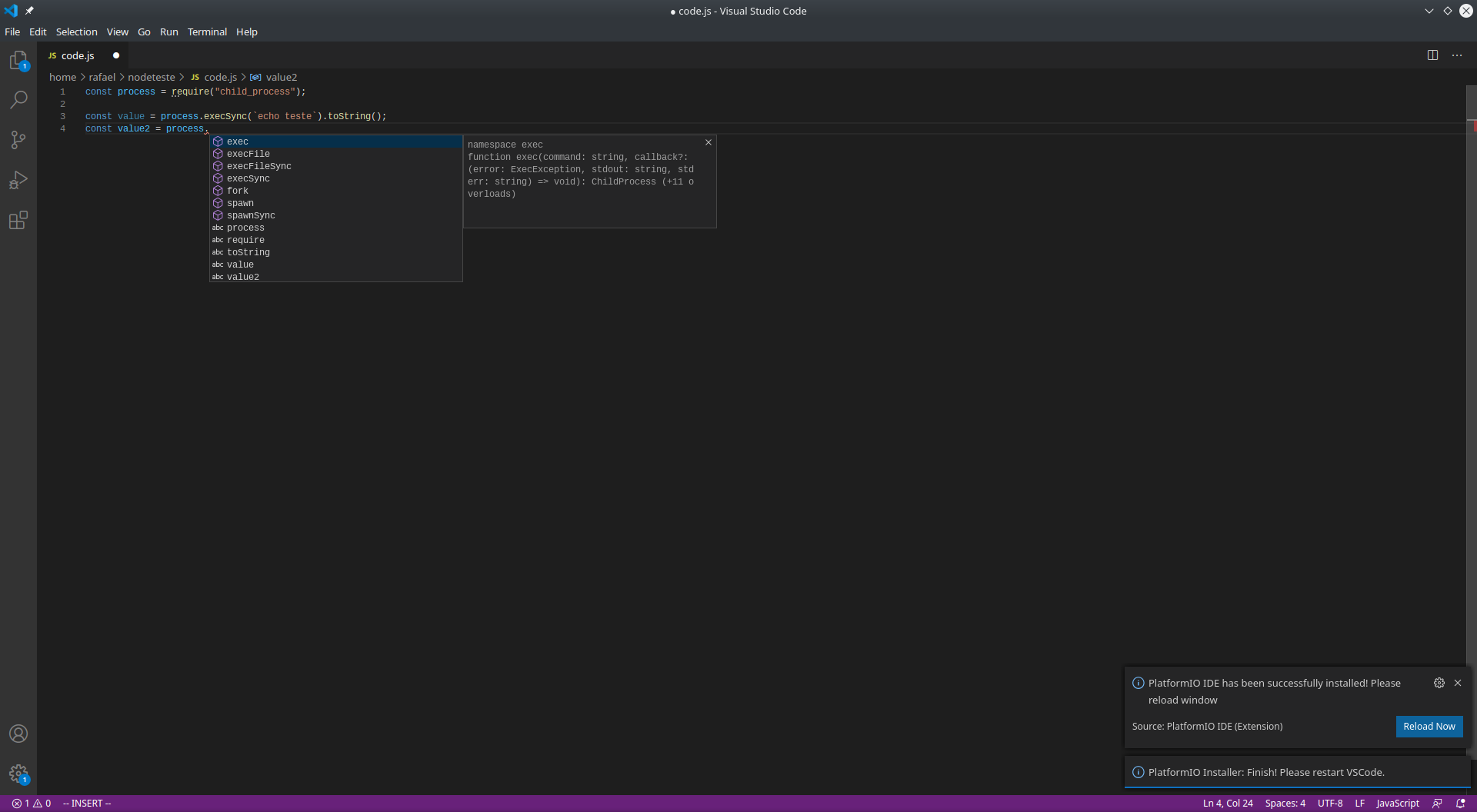 In this example... While I was typing process. I saw some suggestions of possible functions that I can use with this javascript object, which is from the library child_process that is installed on my system.

So far everything is fine. My issue is that I'd like to make Vim work exactly like that as well, without using Visual Studio Code. Is it possible? Can I make Vim read the node.js libraries that are installed on my system and show me which functions exist in the library while I'm typing?

I hestitate to call this comment that I posted an answer but the OP read it, did as recommended, and got "the behavior I expected when I made the question" so... :)

Generally speaking, if you're trying to get as close to an IDE as possible you should look at YouCompleteMe or CoC completion plugins. Since you obviously have node.js installed CoC is a good choice (and if you don't mind a non-native solution like that it's preferable to YCM for other reasons, too, IMHO). Use in conjuction with an LSP server and you'll have Intellisense level completion (in addition to other solid functionality in the realm of linting and refactoring)...and you'll be cooking with gas. :)

But let me elaborate on some of this.

Conquer of Completion aka CoC aka the strangest name for a plugin I've ever heard is a plugin for Vim (and Neovim) that is written in Javascript. Since Vim doesn't have built-in Javascript support you must first install the Node.js Javascript runtime environment but if that isn't an issue for you CoC supports auto-completion and more for a large number of programming languages and for many of those languages has Language Server Protocol support.

The Language Server Protocol aka LSP enables communication between code editors and "language servers" that provide sophisticated language-specific features like code completion, refactoring, and syntax highlighting. Basically, this allows you to offload the expensive processing of some code editing functions from your editor (the client) to a dedicated program (the server). This happens through asynchronous operations that result, for the most part, in a seamless experience for the user. Each server, which you can run locally like any other program, supports a single language, in the typical case.

One of the nicer features of CoC is how easy it is to set up and configure. Enabling support of a new language requires a single command. Adding language server support usually requires just copying and pasting some JSON from the CoC wiki.

Finally, I mentioned "Intellisense". This is the name of the very popular intelligent code completion feature found in the Visual Studio Code IDE. It's a very slick form of auto-completion.

With an appropriately set include/includeexpr and path, you can complete identifiers from included files (among other things).

As the name suggests, this was originally used for C, but it’s applicable to many languages with some work.

I'm not sure about path for node (for the shell, e.g., one can split $PATH on :; tpope's apathy plugin does the right thing for several languages). For include, I would probably use (based on your file)

You might need to use includeexpr to transform the module name into a filename.

Not the answer you're looking for? Browse other questions tagged ide or ask your own question.

69
Is it possible to have vim auto-complete function names, variables, etc. when using it to program?
3
How to set a shortcut to run make in Vim and show the output