How can i compile cpp using vim

I want to be able to compile c++ code from within vim without running a new terminal and calling the compiler. **How can I do it ** please

(I've answered this question so many times that I've lost the count, and impossible to find a complete answer in the lot... I'll bookmark this answer this time...)

Using :!g++ whatever, or :!make sometarget, instead of :make sometarget (without the bang !) is what we used to do 20ish years ago with vi -- we had no choice at the time. Vim integrates call to compilation chains. Let's take advantage of it (in particular in C++ where we can have an extremely long compiler output when templates are involved or when no matching operator<< is found)

Now. There are several use cases:

1. Mono-file projects, everywhere but on MinGW

This is the main use case for users doing competitive programming.

No need to write a Makefile, nor to tweak 'makeprg' option. Thanks to gnumake default configuration, there is nothing more to do.

Actually, a little bit more is required to pass options. It can be done separately through the main following gnumake options:

This one is a little bit more complex. We can trick Vim with :make %< && ./%< which will also send the execution results into the quickfix window. I've never tested it with interactive programs (i.e. that read from stdin/std::cin).

For a better integrated solution, a little bit of vim scripting is required. See this related answer on SO: https://stackoverflow.com/a/56991040/15934

Sorry the previous solution won't work with MinGW. The problem is that gnumake default configuration isn't shipped with MinGW packets.

Unless we patch gnumake configuration, we have to set 'makeprg'. A typical setting is

Note: This solution would also work elsewhere. Yet, I wouldn't bother to change 'makeprg' if I can avoid it. As we would have to play with ftplugins/autocommands if we want to have a 'makeprg' for C and another for C++. i.e. if we want to work with mono-file projects in C and in C++.

Of course, with other programming languages we will have to set (locally!) this option, with :compiler command typically. BTW, to use VisualStudio/MSDev compiler, 'makeprg' (and the error format: 'errorformat') can be configured with :compiler msdev.

In this use case we usually have a Makefile (traditional solution), in which case we have to type :make target as we would have type make target in the console.

When there is a Makefile, it takes the priority over gnumake default settings (i.e. solution 1), as it does in the console.

I'm maintaining a plugin, build-tools-wrapper that tries to autodetect the out-of-source build directory -- which is typical of CMake -- with various heuristics. It even permits to swap the build dir -- the idea is to model build modes (debug, release, release with debug info, sanitized...)

With :make, the compilation is modal: it blocks vim user interface until it's finished. On mono-file projects this is not a problem, on real projects it can quickly become really annoying.

Since the late versions of Vim7.4-2xxx, we can finally compile in background an see the quickfix window being populated with messages as the compilation is going on. Alas, there is no standard/vanilla command in Vim to do that. It has to be done through vim scripting.

In other words, background compilation requires the support of plugins. Several exist. Again there is my build-tools-wrapper plugin. There is also AsynchRun (IIRC) and many more.

Vim is a text editor, not a shell. Although, Vim 8.1 has a built-in terminal that can be opened with the :term command. It would look something like this: 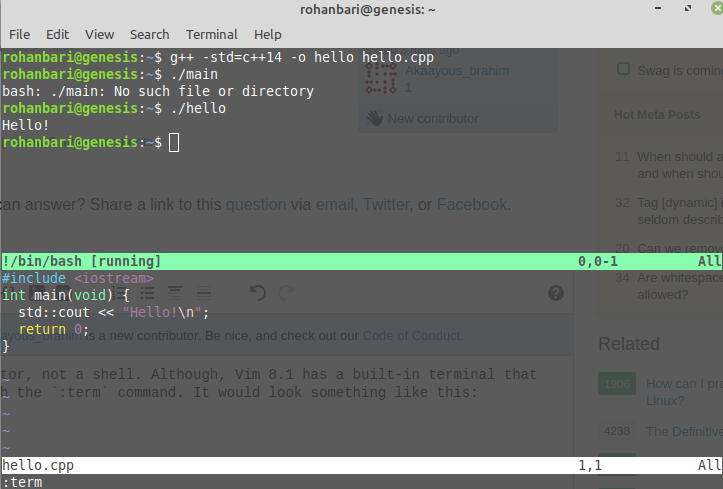 To exit, you can use exit command to quit from the integrated shell.

There's an alternative way and probably it's what you're looking for. You need to hit Esc and type the following:

The output will be:

If you use Makefiles, you can just call :make from inside vim. If not, the behavior of the :make can be customized by setting makeprg.

You can also customize the way the output is interpreted in case there are errors, e.g., to Automatically open quickfix window on make. The entire system is fairly flexible, although in some cases creating a custom key-binding to make a call via the shell (using :!<cmd>) is easier. You can always go back to the output using CTRL-Z and return to vim using fg.

3
Quickfix window not displaying stderr messages?
5
How to redirect the output of a command as the quickfix list to a vim server / function?
2
Multiple buffers of the same file
3
Compiling and running multiple c++ files from vim
5
How to navigate vim buffers using quickfix list?
0
Sort quickfix entries by most relevant files?
0
Compile C++ in vim