How does expression folding actually work?

The following is a stripped down version of my folding function for LaTeX documents:

you can see that the fold text of that line contains 3 dashes, same as lines that contain sections. That indicates that neovim thinks that is a second level fold, instead of a third level one, as it should be.

Indeed, once I toggle the fold with za, I don't get to see its contents, instead the fold is now recognized as a level 3 fold, and another dash appears (I'm not going to post another screenshot, it's easy to check that that's what happens).

Once that fold is expanded for the first time it then behaves as expected. I suspect that is a bug, correct? 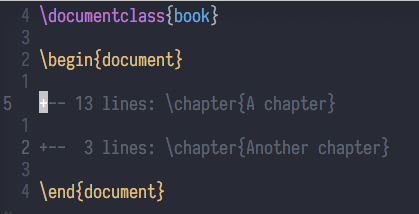 Shouldn't lines 5-18 all be in the same level 1 fold? I suspect what is happening is line 18 is in its own level 1 fold, and the fold associated with the first chapter goes from line 5 to 17.

Browse other questions tagged neovim folding filetype-tex or ask your own question.

5
Fold with markers, but disable nesting?
2
Folding via foldexpr
2
Folding my .vimrc doesn't work as expected
4
Folding slow with vimtex
2
Custom Folding for SQL Files
0
Folding doesn't work for C/C++
0
No folding of markdown files
0
Why does vim ignore commentstring when folding (foldmethod=marker)
0
How do you disable automatic code folding?