When using bash or another shell from a buffer, how do I modify text?

Inside vim, I often use conque plugin, so I can run a bash shell inside a vim buffer. I also may try out VimShell soon.

In conque, lets say I start typing some bash command, and before I enter it, I realize I have a typo. Since this is vim, naturally I want to go to normal mode, navigate to the typo, and modify it using some vim command. But when I try that it either says 'change mode disabled within shell' or it does look like it changed, but when I try to run the command, it runs it with the original typo in tact.

Is this possible to do in conque? If not, is there an alternative that allows this?

I understand that it would not make sense to change text from the shell that has already been entered as a command or that is output from some program, but I would still like to change a command that is partially typed out, before I enter it.

What about VimShell, does that allow this?

After further thought, I take back something I said here. I think it does make sense to be able to edit the output of another program and edit commands I previously entered. Mind you I don't think editing them should do anything other than change what I see in front of me, but this is a Vim buffer, so I don't see any reason why I can't do that.

I also have some thoughts on how I would like commands I am currently typing out to be truly editable before entering them. The plugin should just do whatever it takes to make the command that is eventually entered match what I see on the screen after the prompt. After each edit of the not yet entered command, it could translate those into keystrokes that would result in the same output and current cursor position thus far. Such an approach should also preserve the ability to use tab completion, up and down arrows, and other things that the prompt interprets in a special way.

Is there anything out there that allows something like this?

Actually VimShell does what you want and allows to edit both command line and the text generated by previous commands. Other vim shells I tried do not allow this.

Also works in emacs shell (checked in spacemacs), term and eshell both allow edit only the command line, but in shell you can also edit the buffer. 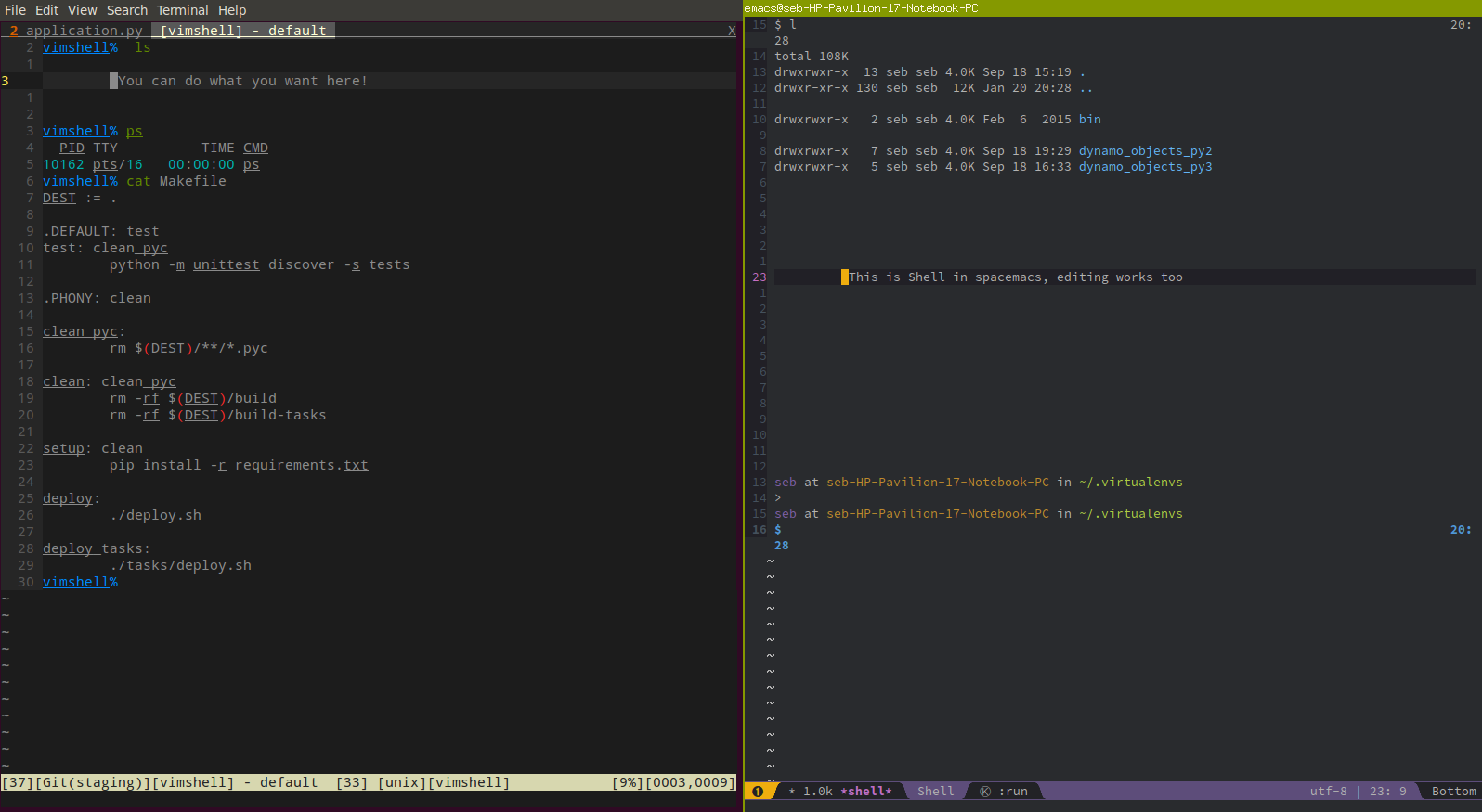 Not quite the solution to your shell-within-vim issue, but if you ever find yourself in a shell (outside vim) wishing you could use vim-style navigation or edits on the shell command you just typed out (or pulled up via the history), you might be interested in the shell's "vi mode":

"When you enter a line in vi mode, you are already placed in 'insertion' mode, as if you had typed an 'i'. Pressing ESC switches you into 'command' mode, where you can edit the text of the line with the standard vi movement keys, move to previous history lines with 'k' and subsequent lines with 'j', and so forth." [GNU's bash reference]

Enable this mode by typing set -o vi in Bash, or sticking that line into .bashrc. It starts you off in Insert mode, but Esc and you can navigate and edit like you're in vi.

Not the answer you're looking for? Browse other questions tagged buffers terminal plugin-conque plugin-vimshell or ask your own question.

19
Is there a way to reliably go back and forth in file history
3
How to read the exact command executed by the shell when sent from vim?
2
Clear shell screen everytime a shell command is run
1
Copy text from one buffer to another using Vimscript
0
Updating buffer content from another buffer
3
add buffer to vim from the shell command line
2
How to run terminal command in interactive mode from NeoVim?
1
How can I give a keyboard shortcut (c-tab, c-s-tab) back to the terminal?