Silence command but not its output

I use the following function to compile a LaTeX document

which I use with the autocmd

How can I change it so that the command itself (:!cd $(dirname ...) is not echoed to the commandline, but its output (the stuff after This is pdfTex) is? 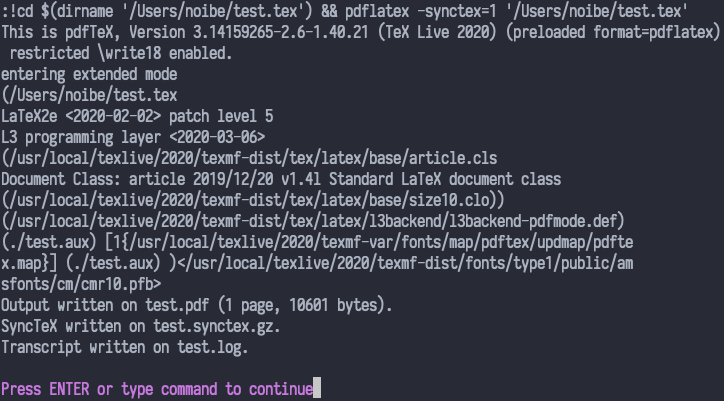 As Ben said in the comments prompting the command used before its result is a built-in behavior that you can not change without modifying Vim's source code.

However a possible workaround is to use :h system() to avoid prompting anything and then showing the result of the command by yourself.

I did a test with the following mapping:

This is ugly but this is probably your best best.

Not the answer you're looking for? Browse other questions tagged key-bindings autocmd filetype-tex or ask your own question.

6
How do I spellcheck TeX files using vim-lexical, skipping some command arguments but not others?
4
Syntax highlighting for custom LaTeX commands
0
map } but not after y
3
How not to use <Space> as a hit-enter key in command output pager
1
Execute command only for specified filetype
1
Mapping sometimes works but sometimes not
1
Vim-latex not starting automatically for .tex files
0
au VimLeave ex mode command not returning output
0
Shell script runs multiple times, I want it to run only once