Vim 8.2 Plugin help. PlugStatus not loading some of my plugins 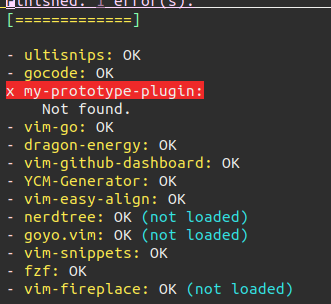 I need help with vim. Just starting vim but struggling with settings. I placed the below plugin in vimrc as this:

Also, why are some of my plugins not loaded?

A vim-plug plugin spec that includes a local file system path is an "un-managed" plugin.

That means you intend to take care of downloading and building it. You're just telling vim-plug where you've put it.

As for the others you haven't provided enough information to definitively identify the problem. One clue is some of the vim-plug code:

That suggests something like running the PlugUpgrade command but not following that with a vim restart or, possibly, a run of PlugUpdate.

It may also occur if you've configured lazy loading for a plugin. Something with the 'on' or 'for' clause like...

With this configuration I could get the "not loaded" message if I checked status without having loaded a Clojure file.

I'd urge you to read everything from the project's github page. Much useful information including the answer to the first question is there.

It looks like you simply copied the [example snippet from vim-plug's readme https://github.com/junegunn/vim-plug/blob/master/README.md#example verbatim, while setting up vim-plug.

That example is not really meant to be used directly, but more to illustrate vim-plug's capabilities.

For the unmanaged plug-in:

That's meant to be for a plug-in you're writing yourself, as the name "prototype plugin" suggests.

If you create a new directory ~/my-prototype-plugin (note that ~ means your home directory here) and add that snippet to your vimrc, vim-plug will be happy to load your plug-in but it won't try to install or upgrade it (since it's not on a GitHub repository to start with.)

You're probably getting this error because you added this line but you don't have any ~/my-prototype-plugin directory with a plug-in you're writing. So you should just remove that line from your vimrc.

Regarding the (not loaded) ones, these two come from that same example in the readme file:

They're using the 'on' and 'for' clauses of vim-plug, which means they're only loaded when a specific command is executed, or when a file of a specific type is opened. So that's also expected. That's normal, expected behavior. Nothing to fix here.

(Not sure why you're also getting it with goyo.vim, that doesn't seem to be coming from that sample readme file and the installation instructions on goyo.vim don't mention any conditional clauses.)

So I guess you should at least remove the Plug line for the inexistent plug-in in your home directory, that one doesn't make sense to you.

Regarding the other lines you got from the example, I guess it's OK if you want to keep them... But you don't really have to. As I mentioned, that list is mostly an example of how to use vim-plug features, such as the conditional loads.

You could just remove all of those Plug lines and everything would keep working. Just add Plug lines for the plug-ins you actuallywant to use in Vim and vim-plug will manage those for you.

Not the answer you're looking for? Browse other questions tagged vimrc or ask your own question.

1
vim not loading vim-plug plugins
9
how to load vim8 optional packages in vimrc?
1
Same plugins for every .vimrc file (vim-plug)
2
vim-plug: install plugins on startup not working properly on Ubuntu
0
I can't get solarized plugin to work in vim (I am using vim-plug)
1
Changing foldmarker per filetype with vim 8.2
2
Can vim-plug write plugin settings directly to .vimrc?
2
Can using Vim-plug and Vundle together cause any issues in downloaded plugins?
0
project-based config: how to load plugins/colors from custom subdir of $PWD when doing `vim -u local/vimrc ...`?