Is it possible for vim navigation to be as quick as a normal point-and-click navigation? For example, I've taken the following example here where I've created four points that need to be clicked: 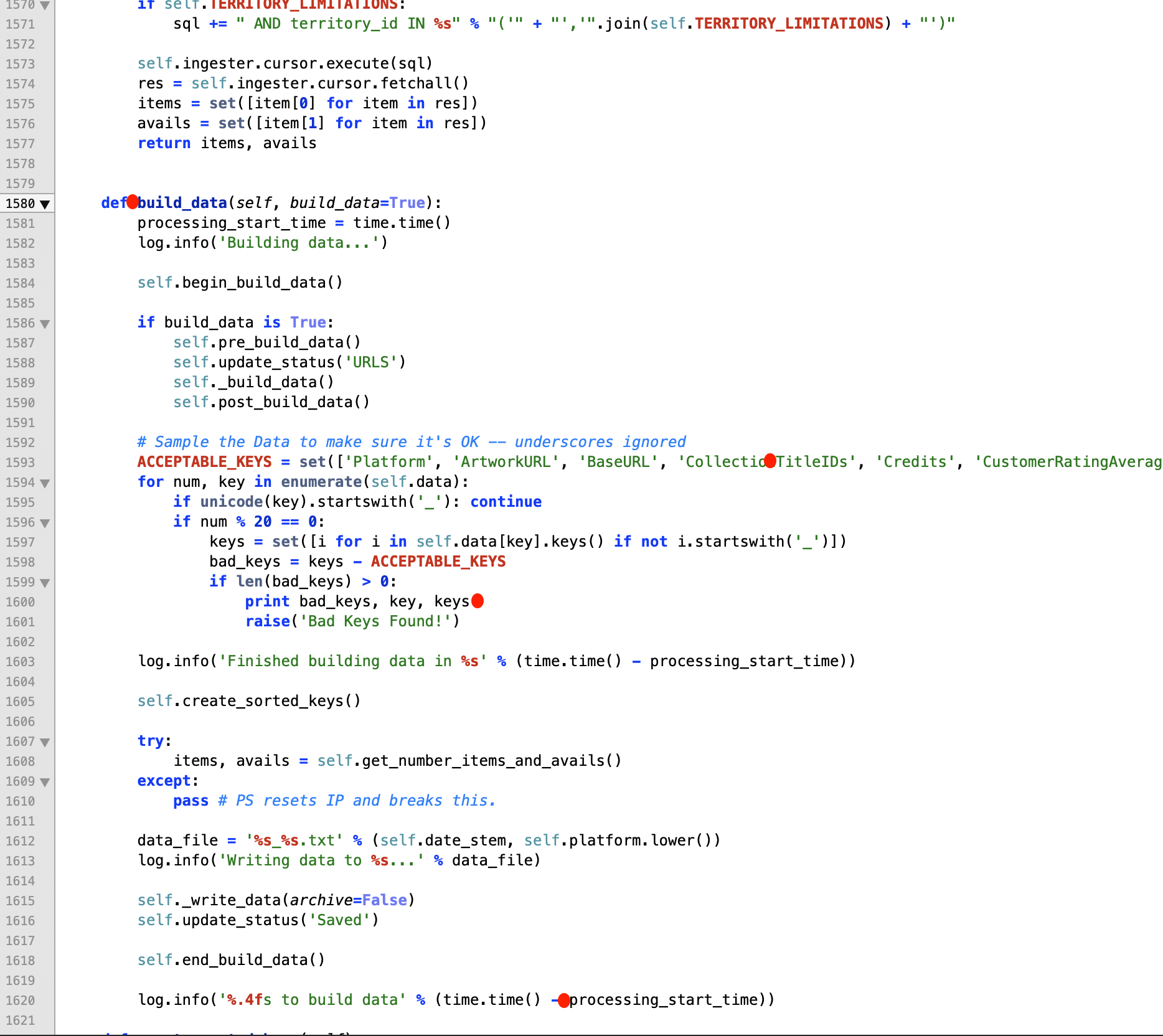 Without any practice or thinking, I'm able to click those four points in 3.9 seconds, video here. What would be the fastest that someone could get to those four locations in vim? I mean if someone were not to "think about it", i.e., just given four random points spaced across a screen what would be the fastest way to get there (fastest, as in lowest amount of time, not fewest keystrokes)?

I am a vim beginner, and my first attempt took about 40s (!!) -- https://gyazo.com/377ca4a30a12c0814ad8b6255b761075. Mostly due to trying to do a search and it basically starting from the top of the document every time. What would be some ways that this can be improved? Note: it seems like I had a bad search option (it was starting from the top of the file), so when I fixed that I was able to click the four points in about ~13.5s.

If helpful, here's the method if someone wants to use that for their answer (can insert ~1500 blank lines above the method):

I'd like to primarily challenge the premise of your question/challenge/race:

What would be the fastest that someone could get to those four locations in vim?

When you're editing text, you're not only moving to specific locations on the text, you're moving to those points and adding or modifying text there, before moving on to the next location and editing that one.

The claim that using keyboard commands in Vim allow someone to edit code faster than someone who only has a mouse (and arrow keys) is essentially about how moving your hand between keyboard and mouse constantly takes significant time and breaks/interrupts your flow, while keeping your hands on the keyboard while alternating between motion (normal-mode) and editing (insert-mode) can be more efficient for many common editing tasks.

You typically don't move to random points on the text while editing. In general, you're moving between related parts of the text while performing edits. For example, if you're refactoring code, you're looking at all uses of the same variable or all calls of a specific function. If you're writing new code, you're typically just working on one (or a few) short blocks of code.

spaced across a screen

That assumes that all the locations you are jumping to can fit in one screen and that's rarely the case.

One of the typical cases where mouse-based navigation quickly breaks down is when the locations you want to jump too are off the screen and you need to scroll.

Using logical (move to next paragraph, or next function, or next class, or next occurrence of the word under the cursor, etc.) rather than physical (point-and-click) motions help with moving to the locations you want, even if you don't necessarily see them on the current screen.

Without any practice or thinking, I'm able to click those four points in 3.9 seconds, video here.

You can use the mouse in Vim, even on the terminal. There are many times where "using a mouse" is the right answer and nothing really precludes the use of the mouse in Vim.

what would be the fastest way to get there (fastest, as in lowest amount of time, not fewest keystrokes)? I am a vim beginner, and my first attempt took about 40s (!!) -

It can take a long time to really master Vim motion commands and be super effective with them.

My advice is next time you find yourself having trouble jumping to a specific point in the text, take a break and try to think hard about it. What's the conceptual nature of this motion? Is it generic enough? How does it relate to the programming language this file is written in?

Then try to find/research motions that will get you there quickly. That might involve searching for them in :help, looking for motion plug-ins that can help, looking for plug-ins that improve handling of the file type you're editing, or even asking on this site how one would move from A to B most efficiently.

The upside of this learning process is that next time you need the same kind of motion, you will know one that works (or at least gets you closer quicker.) With time, you'll be able to move there quickly without really thinking about it. It takes effort to create habits, but once you have them, deploying them is easy.

As mentioned by @Zorzi, there are some settings (such as set relativenumber) and plug-ins (such as vim-easymotion) that you might want to consider looking into pretty soon. I'd say these are some of the obvious starting points for beginners, you might want to begin there and see if/how that helps.

FWIW, I tried it out, and without thinking about it, this is what I ended up typing:

I was a little unclear as to whether you wanted the cursor exactly on the red dots, or on the more significant characters next to the dots. If I guessed wrong, there may be slight adjustments required to the above.

In real life, I almost definitely wouldn't have actually used search for all of these, but since you primed me with "jump fast to a bunch of arbitrary positions on screen" I was predisposed to do so: search is very often the quickest method for moving to a position that is conceptually unrelated to my current position.

I didn't time it, but the vast majority of my time was spent looking back at your picture to find where the next red dot was. I'd be amazed if I could do this quicker with the mouse presuming I also had to move my hands back and forth between the keyboard and mouse between every movement (which I would do if I were editing code at each position: as others have stated, if you're not performing edits, there's no reason to move the cursor).

If I weren't performing edits and were instead just randomly moving the cursor around (for fun?) then I'd probably be slightly quicker with the mouse, but if I were a better typist, I doubt I still would be for this test.

Here's what i did to reach the 4 points:

Given I start from the 1st point,

I was able to do this in around 5 seconds.

That's my flow without thinking, but there are a thousand ways to do those moves, and half of them would be faster than what I did I'm sure!

Here are some other that I usually use:

If the native vim motions are not enough for you, there are some great plugins that could help you, vim-easymotion is a great one

Now, in my above example, I limited myself to the native vim commands, but in reality, I rely a lot on my custom motions.

4
Navigate to tag in a new tab if not already opened, like `tab drop`?
4
How to navigate long lines like separate lines?
0
Is there an equivalent to Xcode's quick jump bar (to navigate Swift MARK annotations within a file)?
1
navigate between current and previous tab or split
1
Can I navigate backwards by word (not WORD) in command-line mode?
0
How can use Tab to navigate completion list
1
List/navigate specific syntax elements in a file?