The latest version of Vim, 8.2, has a new feature called "popups" or "popup windows". They sound interesting but I'm not quite sure what they're good for. Can you enlighten me...preferably with some examples?

Background: I have a plugin for navigating sections in markup documents and wanted to show the section hierarchy in a popup. I distilled what I learned while implementing this down to the following introduction in hopes of getting others up and running quickly...

Vim 8.2's popup windows allow Vimscript authors and plugin developers to create one or more floating, modal windows that, among other things, can be used for tool tips, notifications/alerts, dialog boxes and transient menus.

Each popup consists of a Vim window and an associated buffer. The window and buffer have a number of unique characteristics including:

There are six different functions for creating popup windows. That's a lot but five of them are basically wrappers around popup_create() that provide "pre-packaged" configurations for particular purposes. Here they all are with brief descriptions taken from :h popup-functions:

Text appearance can be controlled with syntax highlighting or using text properties (another major new feature in Vim 8.2...like syntax highlighting except it sticks to associated text as it moves in the buffer). There are also a number of attributes or "options" that control certain other look-and-feel characteristics. This is a sampling of those options.

Option values can be defined on creation of a popup window or afterwards through the popup_setoptions() function.

* It's worth noting that popup window dimensions are, by default, dictated by the contained text. You can override this behavior, within limits, using minwidth, maxwidth, minheight, maxheight.

A popup's lifetime can be controlled several ways including by timer, upon mouse movement or user input or programmatically with popup_close(). The nuclear option, popup_clear(), will dismiss any and all existing popups.

How a popup processes user input can be controlled with so-called "filters". There are a couple of builtin filters including the "yesno" filter demonstrated in the examples below.

Each popup can have an assigned callback function. When the popup is closed this function is called with the "result". This is most applicable for popups acting as menus. The result, in that case, is usually just the number of the row that the user selected. We'll see this in action, too, below.

Finally, we get to the good stuff!

For a time-limited notification popup:

As noted above this will show for three seconds then close.

Now for a simple menu: 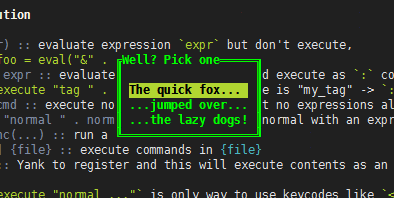 Note the padding option which I used to put a little space between the menu items and the top and side borders.

Choosing the last row results in...

In this example we'll use the builtin filter popup_filter_yesno. This will wait until the user has clicked a close key (x or <Esc>) or one of Y, y, N, or n. Yes replies cause the callback to be called with result 1. No sends result 0.

If I choose Y or y the message ("You said 'yay'") will show on the status line.

If you specify your own filter function then you can intercept a subset of key presses, handling them in whatever way you choose and pass the rest on to the generic filter, popup_filter_menu(). There's an example at :h popup-examples.

Let's try the primary function, popup_create(), with no options...

poplist is a list of strings representing a hierarchical menu, with appropriate numbering and spacing included. 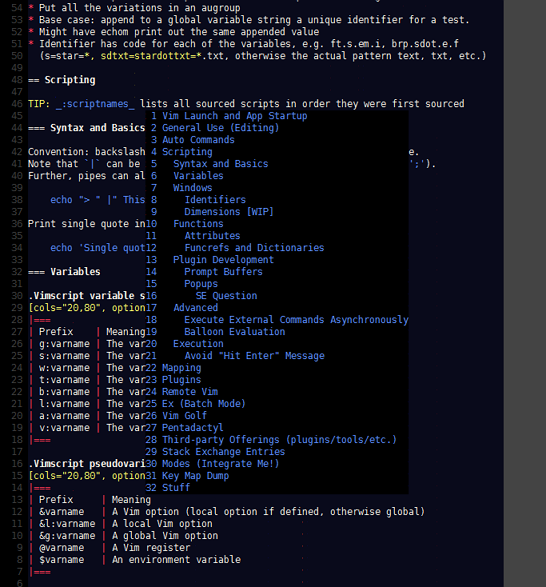 So by default we get a popup window positioned in the middle of the main window, having no borders or padding and with dimensions determined by the content.

The Z-Index and Masking

Finally, let's see the z-index functionality and, for amusement mostly, demonstrate the mask attribute. With 'mask' you can specify popup coordinates and those sections of the popup will be rendered as transparent. I've yet to think of a practical use for this so I just cut off a couple corners and poked a couple big holes in the thing. 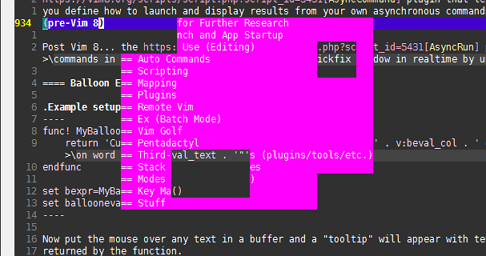 Normally one would expect additional popups to be placed over existing ones but by specifying a lower value for the zindex attribute.... 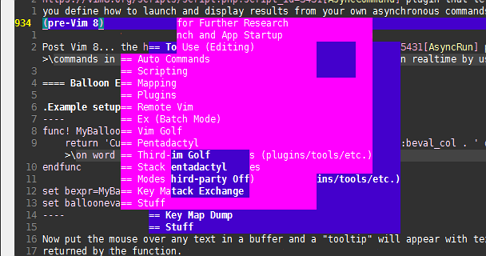 The garish pink? That's the default color for popups in many color schemes. (Completion menu users will likely have seen it before! :P) Override with the new highlight groups Popup and PopupSel.

Well, I hope that gives you a good sense of what popups are capable of. There are certainly some features I haven't covered or only mentioned briefly including:

To learn more about those and everything else popup related visit :h popup for a thousand-plus lines of juicy popup goodness.

6
Does Vim have functionality similar to tmux's `display-panes` command for selecting (goto) a specific window by number?
1
nvim popup vs vim popup
0
How to set the scrolloff for the pop up menu?
1
How can I overlap windows, use non-rectangular windows, or dock a window in the corner?

12
Vimscript: Help with Autoloading, Scope & <SID>
11
How safe is it to use an unknown `_vimrc` or `vimscript` file?
0
What are viewport, layout and workspace in relation to tabs
0
Vim can't search for dot
2
How to move the cursor out of the terminal
3
How can I make a new line in my _vimrc after using the normal i command?
0
How to use tab for indent in indent function while expand tab was set?
1
nvim popup vs vim popup