Highlight syntax in start and end delimiters of region

I'm not sure I'm using the right tool for the job here, but I'm trying to embed Lua syntax highlighting inside a block syntax. The only way I can make this work is with a syn region. I can find the block easily enough with a syn match, but trying to embed another syntax in there (e.g. with contains=@Lua just ends up bleeding all other the place.

This is for the vim-sile syntax plugin. I've managed to do something similar embedding Lua for an inline syntax where the region end actually is just a delimiter, so that is hilghlighted correctly. See for example:

Note how the Lua code inside the \script{...} command works great, but the same code in the \begin{script}...\end{script} block does not. 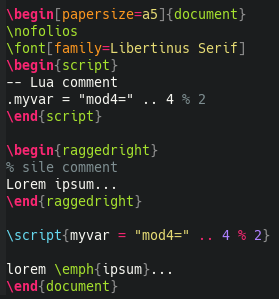 I have matches already setup for parsing the details of \begin{<command>} and those are nicely highlighted for other possible values, but specifically for script when Lua is going to be embedded I can't figure out how to use my regular highlighting for the delimiters and use them in the start/end.

This finds the blocks and does the Lua embedding right, but the start and end text ends up as Delimiter.

How can I capture a region to embed another syntax, but also capture and highlgiht the start and end delimiters?

This syntax rule works to highlight a Lua script inside a \begin{script} block:

You can add this rule to a file named after/syntax/sile.vim, for instance under your ~/.vim directory.

The parts in bold are the ones that make it work.

With contains=sileBlock,@LUA, you're allowing the rules that match \begin and \end (including the following {...} with a command) within this region, so this will end up highlighting the delimiters appropriately.

UPDATE: An additional improvement is to remove the end tag from the region, so that incomplete Lua syntax doesn't affect it. That can be done with the further addition of:

Which indicates that the match end for that tag will be 1 character before the start of where the regular expression matches.

By having that match outside of the region, it will be unaffected by the Lua syntax rules.

(Thanks @Caleb for incorporating my suggestions into an upstream commit!)

Not the answer you're looking for? Browse other questions tagged syntax-highlighting or ask your own question.