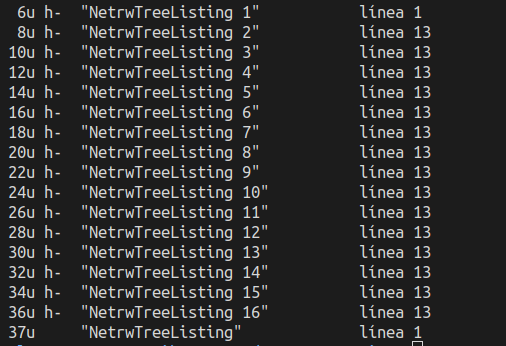 Is there any way to stay always in the same netrw buffer after selecting a file to edit?

Netrw already includes code that attempts to reuse buffers but, as you have discovered, this code currently appears not to handle tree listings and ends up creating many buffers.

So the first thing to try is to make sure you are using the latest version of netrw. It looks like the code has changed as recently as July 2019, so it's possible this is something that has been fixed.

If that fails, however, and presuming you're not planning on altering the netrw plugin itself, your options include:

Not the answer you're looking for? Browse other questions tagged buffers netrw hidden-buffers or ask your own question.

2
What does it mean to buflist netrw buffer?
1
How can I open a file from netrw into a new buffer without making it active?
3
Netrw tree listing style opening files in other directories creates new empty files in current directory
16
How can I close the Netrw buffer?
1
How could I explore the files when using netrw to edit remote files
1
How to close the netrw buffer/window from any other window
0
netrw `Ex` sometimes creates a split