I'm trying to set up patched fonts from powerline/fonts with airline in gvim under Windows 10 64 bit. As you can see from the screenshot here: 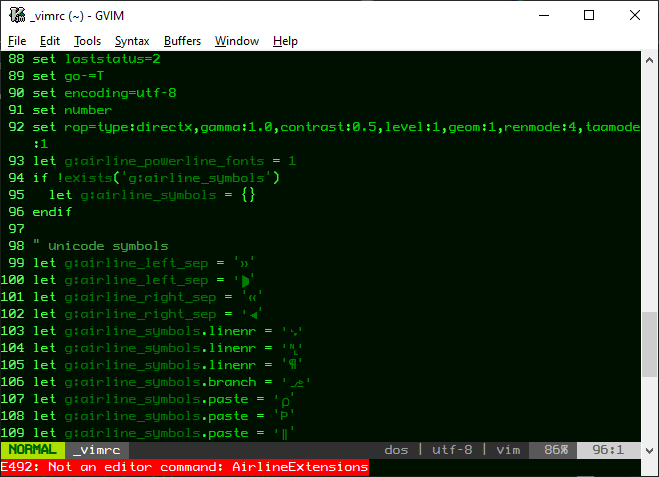 the characters from the font do show up, but the airline itself doesn't seem to output the special characters. I'm using the set guifont=ProFont\ for\ Powerline:h12 directive in my ~/_vimrc. Also, it is strange that although I installed vim-airline through Vundle (with Plugin 'vim-airline/vim-airline', then :PluginInstall), the airline commands are apparently not recognized, for example :AirlineExtensions gives the error message shown in the screenshot.

Airline also doesn't work in plain vim on my setup with ProFont for Powerline set through the terminal Font settings. How do I set airline correctly in both vim and gvim?

Edit 3: I apparently also had a leftover lightline in global vim plugin directory, which was giving the output in the screenshot. I removed it, but now the airline still doesn't show, and this is the output of :scriptnames.

Update: I also found the exact culprit. Apparently, the call to the plugin rstacruz/sparkup (contained in the suggested .vimrc from the Vundle documentation) is causing both that plugin and the plugin referenced in the subsequent Plugin directive to fail to be sourced. Commenting out the offending line fixed the problem:

Update 2: There is an issue on Vundle's GitHub page referencing this.

Not the answer you're looking for? Browse other questions tagged gvim microsoft-windows plugin-airline plugin-vundle or ask your own question.

8
How do I change the Airline theme?
1
Problem with color, symbols and upper bar using airline with Vim in terminal
9
Powerline fonts not working on Airline
2
Unknown symbols in vim near filename and filetype
4
How to set vim as the default Text editor?
3
How do I properly set up airline and powerline fonts with gvim?
6
Gvim 8.1 on Windows 10 won't source $HOME\_vimrc
2
How to turn on airline theme's background in vim?