I expected the folded text highlighted as below picture (ignore red rectangle):

Like above picture, I'd like to have something to recognize that red region of a fold and highlight it only, donot have ctermbg apply to the redundant spaces region.

This question is kind of general, I don't have much experience so I try to explain from user perspective, I'd like to have that red region highlighted only that is a folded block of text.

That is not possible.

However, you can of course change the highlighting group so that it doesn't stand out so much.

Note, that this might make it hard to realize that this is actually folded text as can be seen here: 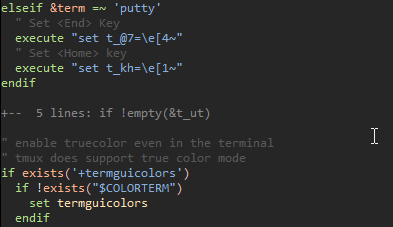 Not the answer you're looking for? Browse other questions tagged highlight folding or ask your own question.

2
Folding via foldexpr
24
Is there a best practice to fold a vimrc file
6
Syntax file: keywords within context
5
Highlight words with no other occurence in file
0
Why is folding partial disabled in .snippets filetypes?
1
Fold special comments
1
Fold: foldtext() for each filetype
0
Vim: Is it possible to modify syntax rule of the Folded group?
3
Record all line-number fold-levels and restore fold-states (despite fold-level change)