How to highlight multiple lines?

When review code, it would be convenient if we can highlight multiple lines at the same time, instead of only current cursor line is highlighted.

As you mention in your question, the :match command only allows a single match to be set up. For multiple matches, you can use the matchadd() function. You can adapt your existing mapping to use this like so:

For your expressed purpose of reviewing code, this should be sufficient. However, if you are adding/removing lines above the lines you have marked, this might not work as you desire: the marks will not move with the lines. There are ways around this, but all will result in much more complicated code. 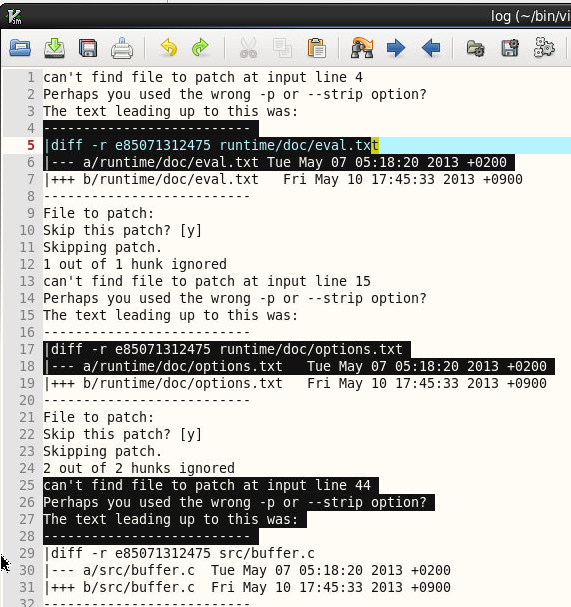 This answer may be a couple years late but since I just had the same question, and none of these answers were even close to being helpful I though I'd share my solution.

I was wanting to improve my mapping that is similar to OP's that highlights a single line :

to be able to visually select multiple lines and highlight all of them.

After being unsuccessful trying to simply modify the mapping to a vnnoremap that takes a range I wrote a function that will run a loop for each line in the selection.

You press capital V and j or k to select other lines.

Not the answer you're looking for? Browse other questions tagged highlight or ask your own question.

3
How to restore a search highlight state after searching for trailing space?
0
How to change the cursor line higlighting only for one window (namely the quickfix one)?
11
How to highlight/match (but not search!) the word under cursor
7
Enable incremental search and highlight while typing a search term?
1
How to highlight multiple words that are unrelated
2
Is it possible to detect a highlighted search match with synIDattr() or similar?
1
Can you call highlight more than once? Need different colors for different matches