I am setting makeprg to perl % to run my Perl script (if there's a better way, I'm up for that, too), and it works just fine, except that it reproduces the first line of output prefixed with the text "(1 of n)", where n seems to be the total output line count.

I'd like to suppress that, leaving me with just what my Perl script produces. Can I suppress that report line from :make? The .vimrc line that sets up makeprg is:

This plugin provides as one of its main features running makeprg non-blocking either in the foreground or the background. Quote from :h dispatch:

Leverage the power of Vim's compiler system without being constrained by synchronicity.

The first command by vim-dispatch is :Make (note the capital M):

Set makeprg as the OP suggested or manually with

Now press either m<CR> or type :Make<CR> from vim-dispatch. Perl will be executed and the output will be available in the quickfix window without any additional lines: 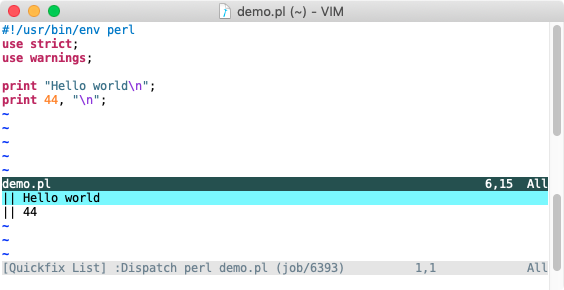 The OP might be interested in having the quickfix window automatically be opened or keeping it open during scripting & running. Unfortunately, I could not figure this out. But someone has already filed this as a feature request on github.

Other plugins provide this but are heavier plugins such as:

This defines an autocmd for perl files. If F5 is pressed, the current file will be sent to the perl interpreter, afterwards the buffer is redrawn, so you will not see any output.

Not the answer you're looking for? Browse other questions tagged makeprg or ask your own question.

2
Compile LaTeX source file in the background without any plugin

0
Make: Nothing to be done for 'build'
3
Terminal setup when running make from Vim
6
Returning from :make to source code has sometimes a step too much
3
Default parameter for :make if $* is empty?
1
How to show make command's output in vertically split buffer?
1
How do I remap the :make command to run a docker container?
4
Running make from vim
1
How to change make command
1
`:make` not echoing output to the command line
1
Make and run from vim