What is a working setup to use Vim plugins UndoTree and Goyo together?

I love UndoTree, saving me many times when I deleted/rewritten entire paragraphs but days later I realized that I needed to extract a phrase/sentence from them, without completely messing up my current version.

Goyo promotes distraction-free writing but I couldn't figure out how to use them together (without going too deep). I can start UndoTree manually or through the callbacks below but I can't switch to the the UndoTree window. This doesn't seem to be the issue with Fugitive's windows but those are not so closely coupled as the ones opened by UndoTree.

Given enough time I could get into Vim scripting and figure it out but I don't want to (and have the time right now) to reinvent the wheel and it never hurts to ask.

edit: As a workaround, I have my usual setup with UndoTree panes on the left with the main text in a window next to it, then I fire up Goyo and I can leave it by simply hitting gt to make any complicated undo manipulation but this is not ideal.

edit2: Fugitive uses preview-windows whereas UndoTree uses :new with absolute locations (the default is :topleft vertical). This absolute positioning causes the issue because opening split windows with any of the commands or with Fzf works just fine.

Turns out I did have the time.

UndoTree layouts use absolute positioning commands by default (topleft,botright) but it can be configured to accept custom ones. 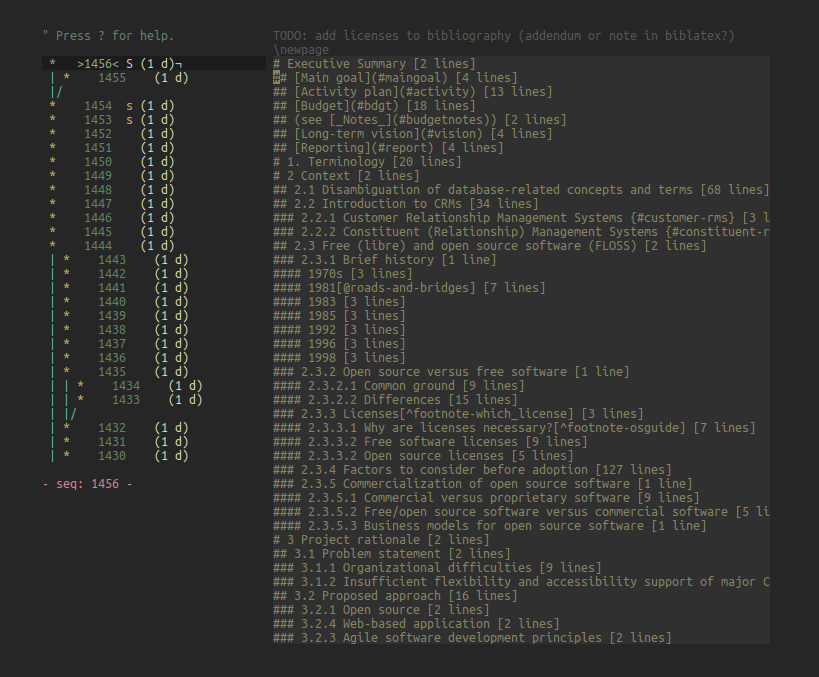 Not the answer you're looking for? Browse other questions tagged vimscript vim-windows or ask your own question.

9
How can I move windows from a vertical split to a horizontal split?
6
How to disable moving the cursor with the mouse
0
How to create a function to `hash` buffer content
1
Is it possible to have the cursor follow a newly-created window?
1
Why does :! open -a terminal or :! start cmd create totally new "applications"?
5
Parsing winlayout() For Toggling Multiple Windows At Once
2
Move to window if specified buffer is opened
0
vim netrw problems on Windows 10