How do I make regexes mutually contain each other?

I've written regexes for markdown for emphasis and bold as follows:

This yields the following (in my opinion correct) highlighting: 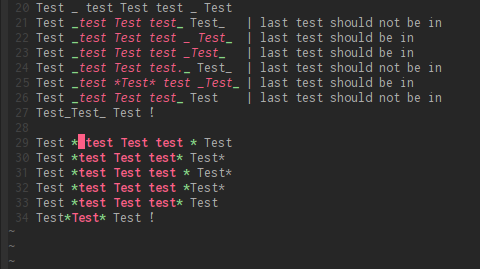 However, in Markdown there could be emphasis inside strong and strong inside emphasis as well. Since I already have the regexes so far, I'd like to allow them to mutually include each other.

I've tried with clusters as follows:

And then referenced those clusters from the "Marker" expressions using contains, but that did not work, it messed up the strong highlighting in my test file and the strong part inside an emphasized part was not made bold.

How can / should I make them contain each other?

This is also important for other things like ` inside emphasized or strong. Maybe I should use region somehow?

If you have known start and end delimiters, you should use regions (:h :syn-region):

The regions above use the syntax-specific capture group (:h /\z() which is great for broad patterns (e.g. if..endif, while..endwhile, etc.), but in this case, it's mainly for readability and avoiding some repetition.

Each region starts with the \z(\) atom to define your delimiter and they must end with what was captured (:h /\z1). Additionally, the delimiters can't be preceded by a backslash.

To skip the delimiters under certain circumstances, the \%(\s\|\\\)\@<=\z1\|\z1\k pattern is used: If it's preceded by whitespace or a backslash, or if it's followed by a keyword character, it should not be considered the end of the region.

Each region contains the others which allows nesting, giving us highlighting like this:

I would like to point out that there are already a number of markdown syntax plugins available for Vim. There's nothing wrong with making your own, but there's plenty of reference material you could draw from, including one specifically made for pandoc.

You can simply add the contains=<...> option to both the PandocEmphasis and PandocStrong to allow for nested matches:

Not the answer you're looking for? Browse other questions tagged regular-expression syntax-highlighting filetype-markdown or ask your own question.

1
How to make vim to automatically break lines in markdown files?
3
How can I highlight only the identifier of a function in Java?
7
Highlight whole todo comment line
4
Syntax highlighting of key = value pairs
0
Fixing pug syntax highlighting
3
How to match paragraphs of text ending with a character?
1
Add decimal mark to each number of each line
1
How to use vim-markdown :Toc: for documents with extension other than .md
2
How to match this syntax group?